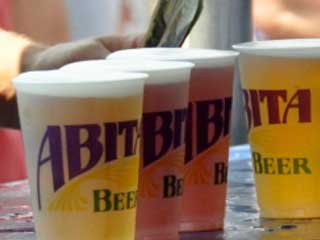 Craft beers accounted for 11% of U.S. beer sales volume in 2014, marking the first time that segment reached the double-digit mark, according to an annual industry report.

And local brewer, Abita, did its part to contribute to that mark."We've definitely played our part," says David President of Abita Brewing Company. "I think, last year, we were the 14th largest craft brewer in the United States."

Craft brewers last year produced 22.2 million barrels, and saw an 18% increase in sales volume and a 22% increase in retail dollar sales, according to the Brewers Association, a trade group representing small and independent craft brewers.

Why are craft beer sales so frothy?

"I think people are gravitating toward craft beers," says Blossman. "It's like a flavor revolution going on. People want higher quality, more full flavored ales and lagers. And that's what we aim to do. That's what Abita is all about."

Abita was formed in 1986, in downtown Abita Springs.

"We're one of the earlier craft brewers in the country and we're excited to have the success that we've had. And, it would only be possible by having great fans in Louisiana that love our product. And, we get to export a little bit of our culture and our way of life to the rest of the country."

And, they've gone head to head against the biggest brewer in the country.

Abita fired back recently when Budweiser aired a Super Bowl commercial that played on Bud's appeal as the beer of choice for work-a-day folks, who would rather just drink their beer rather than fuss over it. "Let them sip their pumpkin peach ale,'' the ad copy said.

The local craft brewer responded quickly, with Abita posting a video touting the fact that it fusses over its beer.
"We're not a dog and pony show,'' Abita's ad copy said. "Yeah, we made a pumpkin peach beer. And it was good. Damn good.''

"Well, you know, I'm not the smartest guy," says Blossman. "But my name is David and I do like taking on Goliath. It was all a little bit of fun, but the reaction was huge and very positive towards us."

"I think of all the responses that we've had...and we're talking, probably, about 350,000 people that actually saw the video and more than that commented on it...only a handful of people took a negative approach to it. Most people were excited that we were taking on the Goliath in the industry."

And, he's not about to apologize for any of his brews.

"We do plan on brewing the pumpkin again, on a very small scale. It just gave us an opportunity, in hindsight, to poke a little fun."